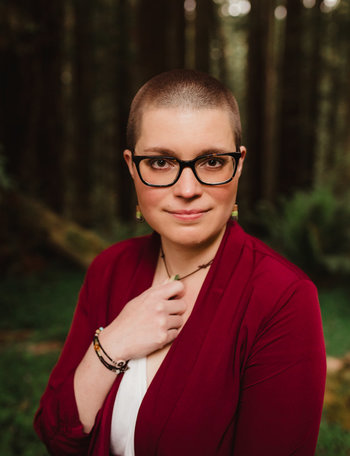 Becky Chambers is a science fiction author based in Northern California. She funded her self-published first book, The Long Way to A Small, Angry Planet, through Kickstarter before its word-of-mouth popularity led to it being picked up for mainstream publication. The novel became the first in the loosely connected Wayfarers series, continuing in A Closed and Common Orbit, Record of a Spaceborn Few and concluding with The Galaxy, and the Ground Within. Widely acclaimed, Chambers’ books have been nominated for the Hugo Award, the Arthur C. Clarke Award, and the Women's Prize for Fiction. Her most recent work is To Be Taught If Fortunate, a standalone novella.

Chambers has a background in performing arts, and grew up in a family heavily involved in space science. She spends her free time playing video and tabletop games, keeping bees, and looking through her telescope. Having hopped around the world a bit, she’s now back in her home state, where she lives with her wife.

She hopes to see Earth from orbit one day.