Literature / The Gods Themselves 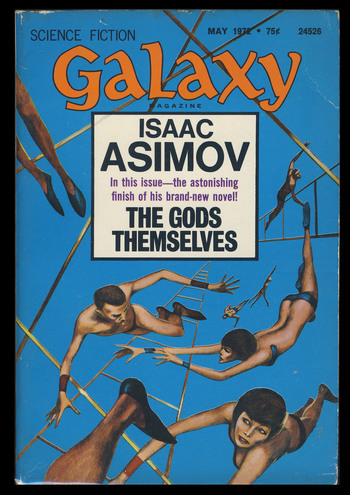 Extremely atypical for Asimov's work, most of the story focuses on sex note  Asimov's science fiction works were known for not featuring aliens, and he mostly avoided romantic plots including never depicting sex, so in a completely out of character book for him, he featured aliens having sex. and a trio of aliens named Odeen, Dua, and Tritt.note More or less the Russian words for "one", "two", and "three". Their species has three genders, and the three of them are a "triad". Dua is of the emotional gender, but she is considered an intellectual compared to the rest of her kind. Their planet is host to two species, divided into "Soft Ones" and genderless beings known as "Hard Ones" (due to the plot-important fact that atomic forces are weak in their universe and Soft Ones have sex by overlapping their bodies).

Typical for Asimov's work, most of the book is them having conversations. Dua discusses a recently-built trans-dimensional reactor with one of her mates. One of them explains that the reactor connects to a universe populated by humans. It turns out that the Hard Ones went to great lengths to convince the humans to build machinery on their end, and the reactor works on the principle of isobar exchange — that is, two substances, each stable in only one universe, decay one into the other and are constantly swapped around.

Dua comes to the conclusion that the reactor has minor long-term effects for their universe, because the machine causes the laws of physics to bleed between universes, making their cold and dying stars burn out slower. However, she is is shocked when she comes to a parallel conclusion, that the reactor will cause stars in the human universe to burn faster in a dramatic fashion, possibly causing a supernova in a matter of decades.

Meanwhile on Earth, a scientist talks about how the reactor works so that the reader understands the conflict. He is trying to experimentally prove that the sun is burning hotter. Unfortunately, the free, clean energy the reactor produces is far too convenient and he can't get the government to do anything about it. Fortunately, two scientists on the Moon are trying out a third option.