Born in an Elevator 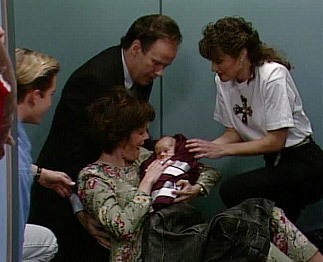 A baby is born while the mother is stuck in a stalled elevator (births in the vehicle en route to the hospital also count towards this trope). Probably the most uncomfortable of elevator moments. A classic Sitcom scenario, especially when the baby has to be delivered by a squeamish and totally unqualified male lead.

This trope is particularly notorious for coinciding with Instant Birth: Just Add Labor!, since in real life labor takes hours, sometimes even days, a.k.a. more than enough time to free someone from a stuck elevator.