Literature / My Teacher Is an Alien 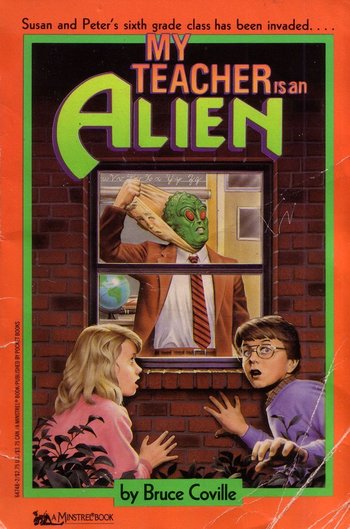 My Teacher Is an Alien is a series of four children novels by Bruce Coville:

The series is about Peter Thompson, a nerdy boy, and his best friend Susan Simmons who find out that their new teacher, Mr. Smith, is actually an extra-terrestrial agent named Broxholm. They suspect an Alien Invasion, and work to expose the infiltrator. In the second book in the series, Duncan Dougal, the class bully and a side character from the first novel, discovers that there is another alien posing as a teacher, and that he has been the subject of an alien experiment to expand his intellect.

Book three completely changes gears, as Peter discovers that the aliens are not necessarily dangerous and ends up living with them as a guest on a gigantic alien exploratory vessel. He learns that Broxholm had been sent by an alien council who has decided to put Humanity on Trial to find a proof whether or not Humans Are the Real Monsters. In the final installment the kid and alien characters team up and embark on a research mission to explore the nature of humanity and determine whether the earth can be saved.

The narrator changes character in each of the books, following Susan in the first as she attempts to find proof of Broxholm's supposedly "evil" plans (abduct 5 students and take them back for study, not realizing his true intent was to use them as proof that Earth can be redeemed), then Duncan in the second as he tries to prove one of his teachers in middle school is an alien, then finally Peter in the last two. The last two books were originally planned to be one longer book, which is why Peter is used as the narrator twice. The "switching narrator" technique is one Bruce Coville would later use in other books.

The first book was also adapted into a video game by 7th Level and Byron Press Multimedia company.