Violence Really Is the Answer 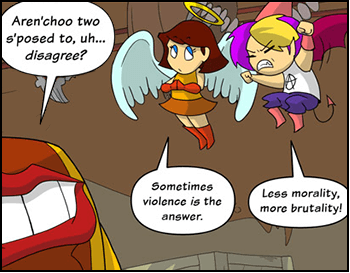 A character who firmly believes in Thou Shalt Not Kill ends up being presented with a situation extreme enough that despite much compunctions and reservations, they are compelled to resort to violence ― and it works. It makes everything all right. It was the right thing to do all along.

The character is usually, but not always, a Technical Pacifist or something to that extent. If they were an Actual Pacifist, they would never resort to violence under any circumstances at all; if they were a '90s Anti-Hero, they would have no problem with it to begin with. In some versions, they will be (self-)tortured after making this choice, but in others, it is surprisingly easy, and it really seems like the message is that pacifism is laughable, or at best impractical. For some pacifist characters, it could be interpreted by some audiences that they will refuse to resort to violence until it is proven to them that their enemy has no qualms about using it and is shameless about doing so, which acts as a sort of Godzilla Threshold to persuade the character that resorting to violence is a necessary evil. This moral is often proven by a Pacifism Backfire.

A classic Hard Truth Aesop. Compare with Murder Is the Best Solution, Violence Is the Only Option, Beat the Curse Out of Him, and The Extremist Was Right. Guilt-Free Extermination War is the ultimate extreme case. Related to Might Makes Right and sometimes related to Right Makes Might.