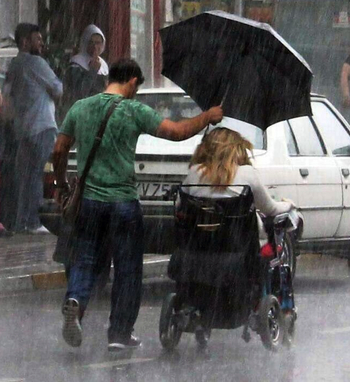 Even on dreary days, people will still help each other.
"It's difficult in times like these: ideals, dreams and cherished hopes rise within us, only to be crushed by grim reality. It's a wonder I haven't abandoned all my ideals, they seem so absurd and impractical. Yet I cling to them because I still believe, in spite of everything, that people are truly good at heart."
— The Diary of Anne Frank, who bore witness to the exact opposite
Advertisement:

In this setting, everyone is born as a moral Blank Slate (or tabula rasa, as John Locke put it), with a natural inclination to goodness. All villains in such a setting are a product of environmental influences, such as upbringing, society, or maybe just an unlucky spot of brain damage. Of course, this doesn't stop good characters from being Well Intentioned Extremists or otherwise having viewpoints and goals that bring them into conflict with other good characters.

This isn't to say that evil doesn't exist in such a universe. It does, and regardless of their excuses, humans (or non-humans; Rousseau probably wouldn't discriminate) who do bad things still bear full responsibility for their actions. However, since nobody is naturally evil, some spark of goodness will tend to remain within even the most black-hearted of characters. Redemption is always a possibility in such a universe, although it may not be easy.

Settings in which Rousseau was right always avert Villainous Lineage, Moral Event Horizon, and Complete Monster. On the rare occasions when characters who would be regarded as Complete Monsters in other settings do show up, their unrealized potential for good and the depths to which they have fallen instead are usually played up as tragic.

It should be noted that the Trope Namer Jean-Jacques Rousseau did not philosophize that humans in their natural state were actually "good", but rather humans who are without a social contract have no morality/concept of good and evil and as such, will act in their own self-interest but cannot do so maliciously—that is to say, that people are naturally innocent in the same way we understand children to be.

Hanlon's Razor and Grey's Law present an interesting related notion: assume an action arises from stupidity or ignorance until it is proven to be intentional evil, and that sufficiently misguided actions are indistinguishable from actual evil (in a similar vein to Poe's Law). Thus, "innocent" and "harmless" are not the same: from this viewpoint, it's not so much "Kids Are Cruel" as Kids are Obliviously Evil/Kids Are Ingenues. Although it's not truly evil to err or make a mistake without desiring another person to suffer, it's effectively harmful as well. Thus, it can be inferred that, in truth, people being born innocent as we understand infants to be, whether or not they're capable of unwittingly causing harm, and only later being truly evil as a result of corrupting themselves with self-interest and greed, is true in accordance with this trope; for people to cease to value others' well-being for whatever reason, and desire what's worst for others, or to willfully remain ignorant or uncaring of how their actions harm others, is the point at which they are evil. Desiring the suffering of another can also be evil in two different ways: people can be actively evil and hate another person (or other people) by desiring that they suffer, or people can be passively evil and not care about others' well-being, which is just as evil.

Compare Humans Are Good. Contrast Hobbes Was Right, Humans Are Bastards, and Humans Are the Real Monsters. See also Default to Good, Blank Slate, Conditioned to Accept Horror, More Than Mind Control, Nurture over Nature, Stockholm Syndrome, White-and-Grey Morality, Grey-and-Gray Morality, Good Versus Good, Both Sides Have a Point, and Then Let Me Be Evil. If a heroic, Wide-Eyed Idealist character believes this but is plain wrong, then Good Cannot Comprehend Evil.