Literature / A Wrinkle in Time 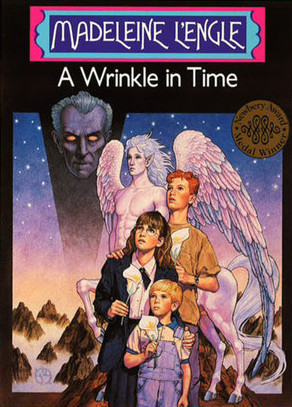 The first book in the Time Quintet series by Madeleine L'Engle, A Wrinkle in Time opens with the well-honored line "It Was a Dark and Stormy Night" and the appearance of a stranger at the Murry household. The stranger, who calls herself Mrs Whatsit, turns out to be much more than the dotty old lady she initially comes across as. Soon, Meg Murry, her precocious younger brother Charles Wallace, and her schoolmate Calvin find themselves on an interplanetary and interdimensional journey with Mrs Whatsit and her equally odd buddies Mrs Who and Mrs Which to rescue Meg's missing father.

The further adventures of the Murrys and, especially Meg, are detailed in the sequels: A Wind in the Door, A Swiftly Tilting Planet, Many Waters, and An Acceptable Time; the five books are known informally as the "Time Quintet." Subsequent books centered around Meg and Calvin's daughter Polly include The Arm of the Starfish, Dragons in the Waters, and A House Like a Lotus.

Followed by A Wind in the Door