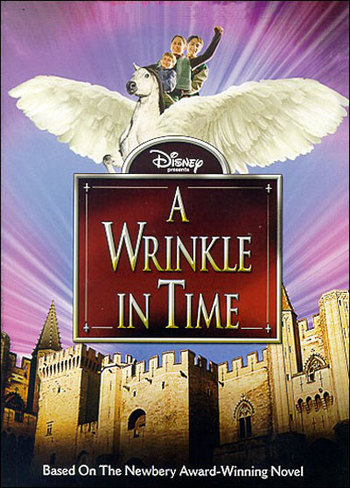 The 2003 adaptation of Madeleine L'Engle's A Wrinkle in Time is a much-shilled Canadian Made-for-TV Movie produced by Disney.

It follows the premise of the novel, but was intended to have an audience of quite young children and suffered through Development Hell, intended to be a 2002 Mini Series. Instead, it was rescheduled and cut to just over 2 hours in length, first originally broadcast as a single block, which would go on to cause it being distributed as a movie. The taming of the movie to fit with the other Disney miniseries, and the discrepancies in format, are seen to have largely contributed to its overall negative reception. L'Engle herself said that "she glimpsed it" and that it is as bad as she expected.

It starred Katie Stuart as Meg, with Munro Chambers as one of her twin brothers Sandy, and Alfre Woodard as Mrs. Whatsit.