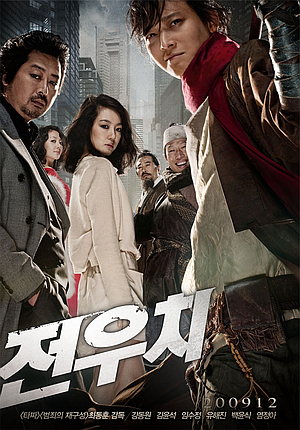 Jeon Woo Chi: The Taoist Wizard (also known as Woochi the Demon Slayer) is a 2009 South Korean fantasy action/comedy film. A national box office hit, it led to a TV series in 2012. It was based on a local folk tale.

500 years ago, a sorcerer had two students. One of them, Woochi, was unruly and womanizing. He also had a sidekick, a dog in human form named Chorangyi that worked for him on the promise of some day being turned into a real human. Woochi also had a crush on a beautiful young widow.

Woochi helps defeat and imprison some "goblins" and rescued an artifact called the Pipe of the Prophecy from them. However, when his Master is killed, Woochi is framed and both he and Cho are imprisoned inside scroll paintings as a result by three bumbling wizards. It is only after the fact that they realize Woo had the Pipe with him; now they must wait 500 years to retrieve it.

Five centuries later, in modern Korea, the three wizards -who now have become a Shaman, a Christian Priest and a Monk- realize that the goblins have escaped, and with the other sorcerer's apprentice not available, they decide to free Woochi and ask him for help. This leads to some future shock for the young sorcerer, and a meeting with a girl who may be the one he once loved.