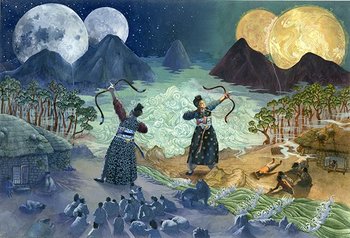 The death of the Sun and Moon Deities.
Advertisement:

Korean mythology consists of national legends and folk-tales which come from all over the Korean Peninsula. The oldest records of them can be found in Samguk Yusa (written in the 13th century by Buddhist monk Iryeon) and Samguk Sagi (written in the 12th century by government official Kim Busik). These two history books are based on much older records that are currently lost.

Although these two books records stories of Korean mythology, their tone is quite different: Samguk-sagi is quite fact-oriented, and although it lists the founding myths of the Three Kingdoms of Korea

(Goguryeo, Baekje and Silla), the author — a Confucianist scholar — considers them as 'not to be believed'. Samguk Yusa, on the other hand, mostly deals with supernatural stories. This is the book where the founding myth of Gojoseon (the legendary first kingdom of the Korean people, now believed to be the real life Bronze-age kingdom that later Korean dynasties are stemmed from), and folktales, legends and myths of the later periods are recorded.

However, most of the folklore were passed down by means of Oral Tradition.

In the heavens lived a god by the name of Hwanung, third son of the Heavenly Emperor Hwanin. One day Hwanung expressed his worries for the humans of the earth, and his wish to rule them in order to 'widely benefit the Human World' ('Hongik-Ingan', now South Korea's national motto). Moved by his devotion, Hwanin allowed him to descend into the world and rule. He gave his son Three Heavenly Seals (Cheonbu-samin), along with the group of three thousand servants and the Three Lords of wind, rain, and cloud. Hwanung thus descended onto the world. He first arrived at the mountain-top of Mount Taebaek and there established a city named Shinshi ('City of the Gods'). Hwanung took care of 360 human affairs, including agriculture, life, illness, justice, good and evil, etc.

It was during this time that a Tiger and a Bear approached him, wishing to become humans. Hwanung gave both of them a handful of mugwort and twenty cloves of garlic, with which they had to stave off their hunger while remaining inside a dark cave without seeing the sunlight for 100 days. The tiger ran away before the ordeal was through, but the bear remained patient and on the twenty-first day turned into a beautiful woman. The woman was given the name Ungnyeo (Bear-woman).

Not long after her transformation, Ungnyeo began to crave a child, and thus Hwanung took human form for a short time, and through him she gave birth to a son. This son was Dangun, forefather of the Korean people. Dangun established a kingdom he called Asadal, meaning "place where the morning sun shines". This name was later changed to Joseon (now called Gojoseon, or Ancient Joseon to distinguish it from the later Joseon kingdom). Legend has it that when Dangun was 1,908 years of age, he abandoned the human world and became a Sanshinryeong('Mountain God').

Similar to the stories of Osiris and Manco Capac, in that they all deal with 'culture heroes' teaching humans on how to live.

Called Shin (meaning 'spirit' or 'deity', an equivalent of the Kami), they are supernatural entities that influence people, and are served by the Mudang (female shamans) in rituals called Gut (pronounced 'goot').note If you're a fan of Series/MASH, you saw one of these awesome women in the episode "Exorcism". It should be noted that in Korean mythology, which god is charged with which area of responsibility slightly varies with each tale (for example, the Goddess of Birth is Samshin-Halmang or Danggeum-aegi, depending on version). And the level of power differs with each (e.g. gods of nature are considered more powerful than the guardians of the house).

For more info and Tropes of Gods (Shin), Heroes, Monsters, Ghosts and other supernatural beings, check out the Character Sheet.