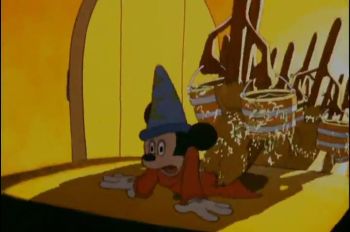 Someone only semi-qualified, the "apprentice", gets hold of the Phlebotinum when its normal user, the "sorcerer", is away. The apprentice uses it for his own advantage, but soon ends up with far too much of a good thing.

At the end of the episode the wizard returns and delivers a quick aesop, which may often degenerate into a Fantastic Aesop depending on how relevant it actually is to the real world. Typically, it's either a hero misusing his mentor's phlebotinum or a sidekick misusing that of the hero.

Often causes a Me's a Crowd or Literal Genie plot.

Named for the old story best known today from its appearance in Disney's Fantasia — Mickey Mouse, the Sorcerer's Apprentice, uses his master's magic to bring a broom to life and make it fetch water for him. The broom obeys only too well, and soon the whole castle is flooded and Yen Sid is forced to (quite literally) bail Mickey out. The Disney version is originally based on a poem by Johann Wolfgang von Goethe, and the oldest version of this trope is a story by Lucian, written around A.D. 150, so the trope itself is Older Than Feudalism.

Not to be confused with the 2010 film (though that does have an homage to the original Disney short, being also a Disney movie). Compare It Won't Turn Off and Radish Cure.