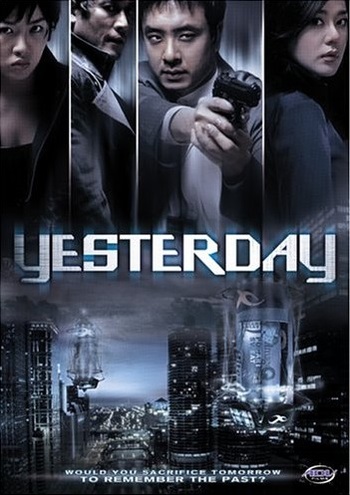 Yesterday (or 예스터데이/Yeseuteodeyi in Korean) is a 2002 science fiction/detective drama movie directed by Chong Yun-su. It stars Kim Seung-woo, Yunjin Kim, Choi Min-soo. It also features Kim Sun-a, who first debuted in her first movie role after being initially active in the Korean acting industry since 1996, but didn't get much recognition from Korean viewers.

When it first debuted, the FIFA 2002 World Cup was being held. As such, the box office revenue was $2 million dollars with a budget of $5 million dollars was when it debuted on June 13, 2002. It was widely released in parts of Asia, Europe and in the Americas.

Jung Han-chul won a Silver Price award at the Golden Cinema Festival for his cinematography work on the movie.

The movie takes place in the year 2020 when North and South Korea were successfully unified. During that time, Korean law enforcement established the Special Investigations Unit (SI or SIU), a crack anti-criminal unit formed from seconded law enforcement officers from disbanded North and South Korean law enforcement agencies. Among them is Yun Suk, an experienced SI officer who has been tasked to investigate the case of a mysterious serious killer known as Goliath. Goliath was reported to be involved in the deaths of certain government VIPs.

Yun Suk's life began to take a spiral after he was involved in a raid in the Chinese-Korean border region where Goliath was reported to hold his son, Hanbyul, hostage in order to lure him out. While his men were killed, it also included Hanbyul after he was posed to make him look like him from a distance. After the raid, It's Personal for Suk to investigate and hunt down Goliath for what he did.

Kim Hisu, a well-known forensic profiler, is involved in an incident where her father, the Commissioner of the Korean National Police Agency is held hostage during a terrorist incident.

In both incidents, Goliath leaves behind a pendant that's somehow linked to the mysterious headaches and visions they've been receiving. As the two work with the rest of SI to investigate Goliath, it somehow leads to a mysterious black ops project launched by the former South Korean government in a gene enhancing project that was shelved for unknown reasons after children were kidnapped in the 1990s.

The Korean trailer can be seen here