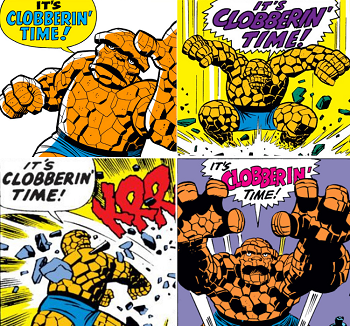 "It's captionin' time!"
Robin: Holy cow!
Batgirl: You just had to say that.
— The New Batman Adventures, "Critters"
Advertisement:

An expression used by a character numerous times in a work. Merely uttering this phrase in the office will clue others in to the character you're referring to.

To be a Catchphrase, the phrase must be repeated multiple times in an identifiable way — what is simply the most memorable line of a movie is not a Catchphrase unless it is repeated by the same in-universe character. When it's the audience that adopts a character's line as a Catchphrase, it's a Memetic Mutation.

If the character has a Badass Creed, it will probably double as a Catchphrase. Beam Me Up, Scotty! is a false or oft-misquoted Catchphrase. Compare Arc Words, One-Liner, Other Stock Phrases, Word Power. Contrast with Author Catchphrase, which is when a phrase is recycled across unrelated works by the same author/actor/creator.

Not to be confused with the gameshow Catchphrase, which was just named for this trope.

Example of:
I'm Taking Her Home with Me!