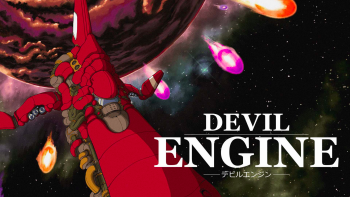 A last ditch effort to destroy what was once to be our savior. A final mission to eliminate a disastrous future. A single ship against Earth’s entire military. The Andraste is the only hope to defeat...the Devil Engine.
—The official game page

Devil Engine is a Horizontal Scrolling Shooter developed and self-published by Protoculture Games (previously published by Dangen Entertainment). It was released for PC via Steam and for Nintendo Switch in 2019.

The game is made in the visual and gameplay style of 16- and 32-bit shmups from the 90's, and features a synth-based soundtrack with Hyakutaro Tsukumo of Thunder Force V fame as a guest composer. Players pilot the Andraste, an AI-controllednote in-universe ship with three weapon types at its disposal, an offense-oriented Smart Bomb attack, and a defensive Burst attack that cancels surrounding enemy bullets, or the Scathach, a ship focused on Homing Lasers and several levels of powerful special attacks.

If you want to see some high-score no-continue-clear runs along with some developer commentary, check out this

An Expansion Pack, Devil Engine Ignition, is planned for release. It will include a variety of new features, including an Ignition campaign with 6 new stages, a new ship, and an arranged soundtrack by various high-profile video game music composers. It will serve as the initial release version for PlayStation 4 and as paid DLC for the other console versions. A demo of the first stage of Ignition mode can be played in the original game through a password

. Ignition was scheduled for a winter 2019 release, but was delayed due to disputes with Protoculture Games and Dangen Entertainment

. As of January 2021, Protoculture and Dangen have agreed on amicable terms for severing their partnership

, with Devil Engine now being a self-published game. However, Ignition's and the PS4 port's releases are still in limbo with no publicized release dates.