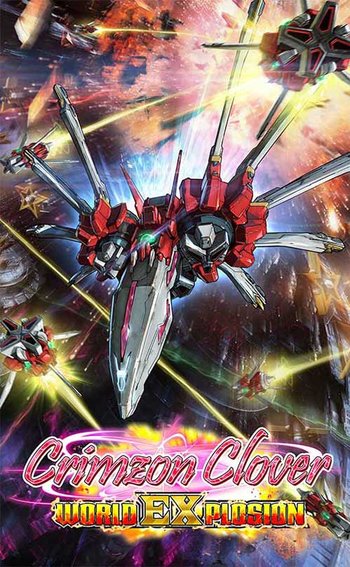 "0% moe, 120% explosions!!"
Crimzon Clover is a doujin Vertical Scrolling Shooter developed by the Japanese developer Yotsubanenote also known as Clover-TAC, a well-known "superplayer" in the Shoot 'em Up community. It was initially released at Comiket 79 on January 3, 2011. The game quickly became a big hit with the shmup community, and it is often positively compared to CAVE games in terms of production values. A three-stage trialnote one-stage for Unlimited difficulty based on an earlier build is available here

. Can't read Japanese? Look for the green button that says "Download Now" in English alongside some Japanese text..
Advertisement:

The plot-less premise is simple: fly through five different stages, using your chosen ship's weapons and Break Modes to destroy waves upon waves of enemies while dodging constant bullet barrages and racking up multipliers and points. There are three different ships to play as, as well as three different modes, all of which provide unique gameplay experiences.

A version 1.01 patch for the full version is available here

, and adds new features like replays and Western-style digit grouping while correcting a few bugs. However, if you've bought a copy since March 2011, it should be of a print run that already has 1.01.

An arcade version was released in 2013, titled Crimzon Clover for NESiCAxLive and available for Taito's NESiCAxLIVE content delivery service in Japan and the United Statesnote in Round 1 locations only for the latter region. It is an Updated Re-release, featuring difficulty rebalanced (mainly difficulty increases) for an arcade environment, a new Type-III ship, Boost Mode in place of Simple Mode, and a Time Attack mode.

The arcade version was ported to the PC for a worldwide release as Crimzon Clover: WORLD IGNITION. It was released on Steam

on December 2, 2014. This version of the game features all the content of the NESiCAxLive version, as well as Novice variants of Boost and Original mode, and is available in seven different languages, including English and the original Japanese. Two pieces of DLC were released for this version: a Superplay Replay mode that features full-game replays of the arcade version from top-level players (one for every combination of ship and mode) and detailed commentary for each replay that also serves as a strategy guide, and an "Arranged Soundtrack" (actually an all-new soundtrack) by Spanish video game musician Gryzor87.

Another updated version, titled World EXplosion, was released on the Nintendo Switch on October 29th, 2020, with a Steam release on December 6th, 2021 (notably as a separate release rather than an add-on for World Ignition, although those who already own World Ignition on Steam can get a discount until June 7, 2022, and World Ignition was eventually delisted on December 21st). This version of the game features everything from World Ignition, including the DLC (except in the Switch version, which lacks Superplay Replay), and features a new Arrange variant of the game with remixed mechanics.

Shooting Game never die.
Praying the lucky clover will always be in your heart.