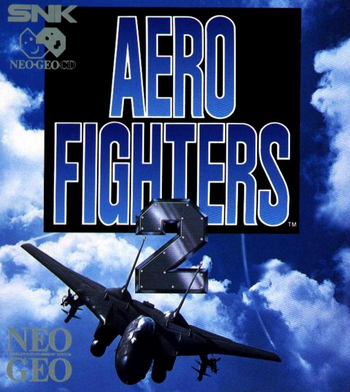 A top-down vertical scrolling Shoot 'em Up series by Video System, known as Sonic Wings in Japan (and sometimes in the rest of the world) (not to be confused with Sonic the Hedgehog). On the surface, Aero Fighters looks to be a standard military shoot 'em up video game, but what makes this series unique and charming is its own variety of playable characters, with a few examples being a spirited American cyborg, a Ninja, a J-pop Idol Singer, a rich girl and her tutor, an infant, a dolphin, and even some Crossover characters from other Video System games.
Advertisement:

The squared-off font used in the logo was famously misread by John Green as Nerd Fighters.

I never thought I'd be reading trope examples over a jungle:

Hey, you idiot! Make a move, or you will be finished! Show me what you've gooooooooootttttttttttttttt!!