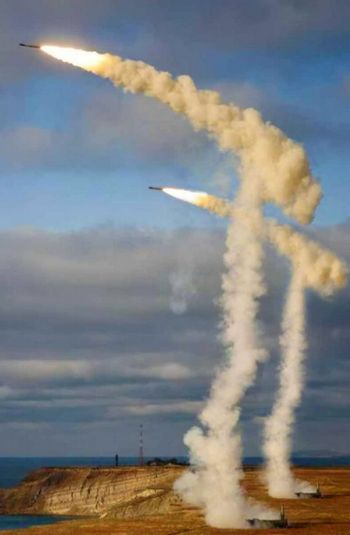 "By some unimaginable level of control, the blinding shaft of energy split in two."
— Jack McKinney, novelization of Robotech's Macross Saga
Advertisement:

Missiles or beam weapons that fire along trajectories that are at an unlikely angle off of their target, streak along for a fair distance, and then make sudden synchronized turns in order to actually bring themselves to bear and hit it. The individual missiles of a Macross Missile Massacre almost always Robotech on their way to a target. Often, it seems the best (or only) way to avoid this or a Macross Missile Massacre is to perform a High-Speed Missile Dodge.

Named for the "adaptation" of several anime known as Robotech, in which the behavior was first seen in the West. Has nothing to do with the method in which said series was created.

Subtrope of Homing Projectile. When lasers do this, it's Homing Lasers. See also Magic Missile Storm, which is likely to involve this trope. When an unguided projectile does this because a game engine assumes attacks always hit, it's Homing Boulders.