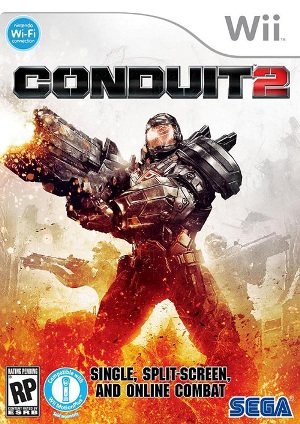 Conduit 2 is the sequel to High Voltage Software's Nintendo Wii First-Person Shooter The Conduit. Once again, the player is Michael Ford, a former Secret Service agent caught in the middle of an Alien Invasion set in the near future. Taking place immediately after the first game, Ford must travel around the world, engage in firefights against dueling alien factions, and try to wrest the fate of the Earth back from the Big Bad and his supporters.

This game is developer High Voltage's attempt at fixing the shortcomings from The Conduit. Instead of making the engine and actual game simultaneously, they focused entirely on the game. Instead of making levels with no planning, they made actual concept art. The respawning egg sacs, static cutscenes and exploding Drudge mines were removed. They toned down the hype, perhaps a bit too much — Sega chose April 19th as the date for the game's release, the same day as Portal 2, Mortal Kombat 9 and SOCOM 4, and Conduit 2 was released with next to no fanfare. The sites that did review it criticized the game for a short, disjointed single-player campaign and perceived deficiencies in the voice acting, level design and story but praised the multiplayer, which improved upon the original despite it already being the game's strongest point.