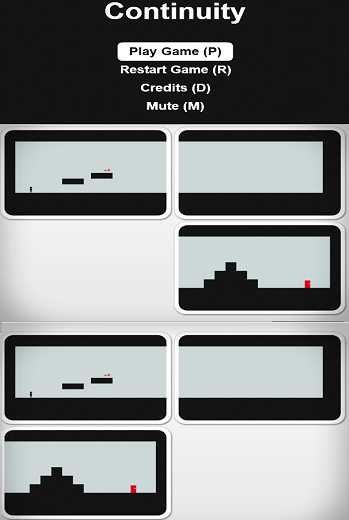 The title screen, and the first screen, before and after manipulation.
Continuity is a 2009 Puzzle Platformer game made by Elias Holmlid, Dmitri Kurteanu, Guy Lima, Jr., and Stefan Mikaelsson for a student project. It won the Best Student Game award at the 2010 Independent Games Festival.
Advertisement:

As with many Flash games, it's a Platform Game with a twist, and the twist here is that each level is made up of several 'screens' which form a sliding block puzzle, and the player can move these screens around to enable their character to move onto screens they otherwise couldn't reach. In short, it's a platform game where spatial continuity is not constant and must be manipulated to solve each level.

It could also be thought of as Portal in reverse: instead of creating portals to make discontinuities in space, you're changing the very structure of the space through which you travel.

The goal of each level is to collect all the keys and open the exit door.

It can be played here.

A sequel, Continuity 2: The Continuation, was released in 2011 for iPhone and iPad.