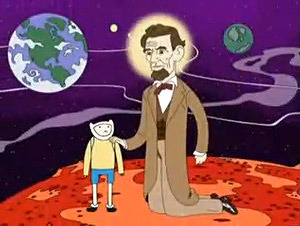 Pen/Finn: What's going on? A-A-Abraham Lincoln?
Lincoln: Pen. Your mind has been transported back in time. And to Mars.
Pen/Finn: What?
— Adventure Time, "Pilot Episode"
Advertisement:

A type of joke that goes "Hey, look! A historical figure!" Apparently, there's something inherently funny about dead famous people, so that a quick cameo/reference is all you need to get a laugh. Part of the humor may come from putting the figure in an unexpected location or silly situation. Abraham Lincoln may be funny on his own, but Abraham Lincoln on a spaceship is even funnier. Another variation is to have the figure take some other form. Zombie Theodore Roosevelt, Robot Oscar Wilde, Evil William Shakespeare and the Giant Head of Errol Flynn could all be completely hilarious.

As far as historical figures who can be the subject of this kind of joke go, there seem to be three categories: those that everyone knows like Lincoln, those only known for one thing, like Grover Cleveland, and those where they are only known for not being known, like Millard Fillmore.