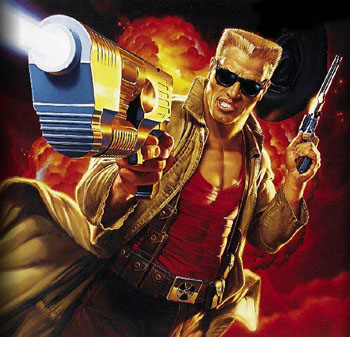 The Duke Nukem franchise started early in The '90s as a series of regular side-scrolling platformer games. It started under Apogee Software/3DRealms development, but in 2010, the rights to the series went to Gearbox Software. In February 2021 Gearbox (and by extension Duke) was purchased by THQ Nordic. Later that year, 3D Realms was purchased by them as well, once again placing Duke and his original creators under the same roof.

The series is composed of several games which follows a loose continuity:

There were also several spinoffs for consoles and handhelds.

A book titled Duke Nukem Does the Internet was released in 1996. It is an instructional book in the vein of the For Dummies series, teaching the reader how to set up and use the internet (though said advice might be outdated by now), narrated entirely in-character by Duke Nukem himself.

There are also hints of a live-action film

Not to be confused with a member of Captain Planet's Rogues Gallery.

"It's time to kick ass and chew bubblegum. And I'm all out of gum."