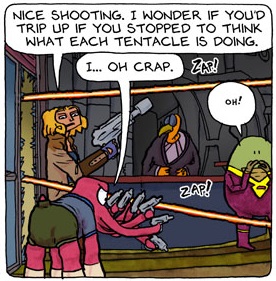 "If I try to think about how it works, it doesn't work."
— Tiffany Aching, I Shall Wear Midnight
Advertisement:

A trope named for the folk tale poem about a centipede who had no trouble walking until asked how he managed all those legs. He started thinking about the process and immediately became unable to do it anymore. In psychology the effect is known as as "hyper-reflection" or "Humphrey's law" after psychologist George Humphrey who wrote about the poem's profoundness in 1923.

Often encountered during the Bizarre and Improbable Golf Game, when one player attempts to induce a dilemma in his (usually winning) opponent by asking, "Do you breathe in or out on the backswing?" That said, this can show up in any context featuring a complex activity that requires one "get into the flow".

If this is attempted on a group of people simultaneously, it may lead into someone biting into the Apple of Discord.

Compare with Achievements in Ignorance; Acting Unnatural; Damn You, Muscle Memory!; Don't Think, Feel; Magnum Opus Dissonance; Paralysis by Analysis; Performance Anxiety; Puff of Logic; You Were Trying Too Hard; Thought-Aversion Failure; Reminder of Impossibility; and There Is No Try.

Should not be confused with The Human Centipede. Or even with the Creepy Centipedes, which are much more likely to give you a dilemma.

Warning! Reading the examples below may cause you to have similar problems.