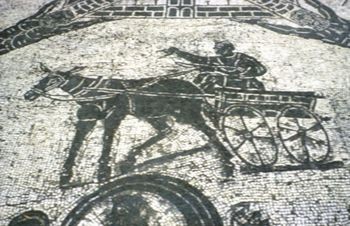 Ancient Roman Floor mosaic at the Baths of Musiciolus

All of The Oldest Ones in the Book first recorded after the invention of the Greek alphabet (c. 800 BC) and before the fall of Ancient Rome in the 5th century (c. 476 AD), a period usually called Classical antiquity

. Works from this period include:

Note: Tropes originating in other mythologies/religions are not indexed here, as we have no idea whether those stories even existed by the 5th century AD, or what forms they took, centuries before they were first written down. Even Norse and Celtic mythology are only Older Than Print; although they're derived at least in part from earlier (unwritten) stories, the details are fundamentally un-dateable. Early folklorists often started with the assumption that folktales and myths never changed; more research has shown that people can and do modify all sorts of tales for many purposes.

Tropes that date back to this time period: