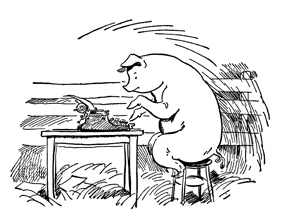 A pig and his typewriter.
Advertisement:

Freddy the Pig is a long-running children’s series written by Walter R. Brooks and illustrated by Kurt Wiese. Published between 1927 and 1958, the books feature a group of talking animals living on a farm in upstate New York. The central character, Freddy, often serves as the driving force behind their adventures, as he tries his hand (hoof) at various professions, becoming a detective, a newspaper editor, a pilot, a politician, and an astronaut, to name only a few. Along with the farm animals, the cast of the books features Mr. and Mrs. Bean, the owners of the farm, various wild animals living in the woods, and the population of the local town of Centerboro. The series consists of 25 books and a collection of poetry.

Aside from the very well written dialogue, one of the things that makes the series stand out is its treatment of talking animals. While all animals are capable of speech, only the Bean Farm animals choose to speak to humans, making them moderately famous. As Freddy interacts with the people of Centerboro throughout the series, he often encounters prejudice from the human villains, usually leading him to develop his own animal version of various human institutions. By the time the series ends, he has helped to create an animal newspaper (The Bean Home News), an animal bank, and even an animal government, the First Animal Republic, complete with a F.B.I expy, court system, and prison.

The stories are also notable for reflecting the times in which they were written, with victory gardens and scrap drives featuring in those books written during WWII, while those written after often deal with the fear of Communist infiltrators. Ultimately though, the series lands high on the Sliding Scale of Idealism Versus Cynicism, with Freddy and his friends almost always saving the day through cleverness and common sense.