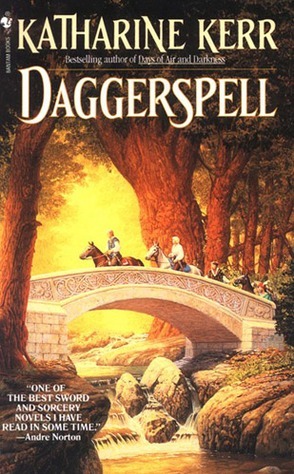 A series of Fantasy novels, notable for its extensive use of Reincarnation and the resulting highly anachronic order, written by Katharine Kerr.
Advertisement:

Near the end of the first century AD, one Celtic tribe fled their homeland in Gaul to escape Roman rule. Traveling by magical means, they were transported to another universe, where they founded their own kingdom, which they called Deverry.

The main narrative thread starts ten centuries later. Through the use of frequent and extended Flashbacks, the main story is intertwined with the stories of the character's previous incarnations, revealing how present circumstances stem from events occurring in a previous lifetime. This illustrates the concept of Wyrd, or karma. As the series progresses, the flashbacks become longer, with some of the later books being more than half flashback.

Originally intended by the author to be a short story, the work took on a life of its own, growing longer and longer. The series finally reached its conclusion with the publication of the fifteenth book in 2009. The author likens the series to a play, dividing it into four "acts," each containing three or four books.

The novels use a richly detailed system of magic, called dweomer, which is based upon real-world magical traditions, such as Kaballah,

and the Golden Dawn

Although dweomer is nominally a path to spiritual enlightenment, it produces quite spectacular displays, and can be powerful enough to steer the destiny of nations. Dweomer requires both an inherent gift as well as long study to use, and is a combination of Theurgy and Force Magic.

Centuries earlier a young prince has found out that the Dweomer is his true calling in life. In his haste to begin learning magic, he makes mistakes and is disowned by his father, receiving the name No One (written as Nevyn for the reader's convenience). A bit later, this causes the tragic death of his former lover, her brother, as well as another nobleman. Having learned about reincarnation, he swears never to rest until he had put his errors right, and the Powers That Be accept his oath, granting him immortality.

Time and again, the principals in that ancient tragedy are reborn, and repeat the same destructive patterns — as seen in the many flashbacks. As the series begins, they are reborn once more, this time as Jill, daughter of the notorious mercenary Cullyn, and Rhodry, a young nobleman. The characters struggle to find their destiny in life, while the followers of the dark dweomer attempt to plunge the kingdom into war.

The first two books were later reissued in a revised edition. Changes to Daggerspell are minimal, but Darkspell contains a number of significant changes, mostly to the character of Sarcyn, who was brought more in line with how Kerr originally envisioned him before her editor overruled her. As a result, the old version is considered to be non-canon.

Several decades later Nevyn is dead, Jill is a powerful dweomer master, and Rhodry has a problem; he isn't visibly aging. As a half-elf, he can expect to live for another century, but he has no right to the noble title he holds. Revealing this would mean a disastrous war, so instead Rhodry fakes his own death and rides off into the sunset, straight into another threat arising from his previous lives.

This time, the main threat comes from the Guardians. Evandar, leader of the Bright Court, has been manipulating the affairs of men, elves, and dwarves for millennia, in pursuit of his grand schemes. Unfortunately, his wife has plans of her own. Posing as a Goddess, she raises an army to conquer Deverry which, unknown to her, would also provide karmic retribution for the acts of the Deverrians' ancestors, when Evandar brought them out of Gaul.

The fake goddess who inspired them is dead, but the invading hordes remain. Now, the former priestess of the hordes must resettle into her old life, while her deeds in a past life begin to catch up with her. In the end, a despairing Rhodry agrees to be transformed into a dragon.

A few decades later, Jill and Nevyn have both reincarnated, and taken up the problems left from their previous lives, including Rhodry, whose transformation was never meant to be.

(NB: The Black Raven was originally intended to contain the material in The Fire Dragon as well; likewise The Silver Wyrm was split into The Spirit Stone and The Shadow Isle.)