Compete for the Maiden's Hand 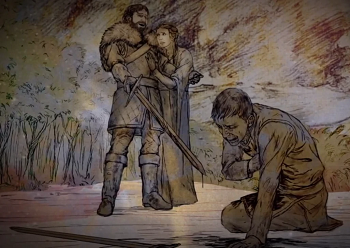 "When Petyr heard of my engagement, he challenged Brandon to a duel. Petyr survived only because I begged Brandon not to kill him."
Two or more people wish to either court/woo or outright marry another, but perhaps the target of their affections isn't sure who to choose, or perhaps the suitors discover their rivalry and decide to compete to see who will drop out of the running (whether with or without the knowledge or approval of the maiden).
Advertisement:

This trope only applies if one suitor challenges at least one other suitor to the contest. If the contest is imposed by a third party, such as by the maiden's father or by the maiden herself, then the example belongs in Engagement Challenge.

Related to Engagement Challenge and can be a Secret Test of Character, or not so secret test of character.

Can lead to Murder the Hypotenuse or a Cock Fight if one of the suitors doesn't accept the contest or doesn't like the outcome.