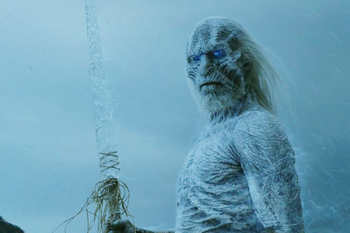 "Do you feel... a chill?"
— Karthus the Lich, League of Legends
Advertisement:

Vampires in fiction are almost always colder than they were before they turned. This most likely originates from the fact that vampires are essentially living corpses, or it may be due to evil being cold. Of course, having Friendly Neighborhood Vampires in the setting would probably mess with that analogy.

Another problem with this trope is that there's no reason a dead (or undead in this case) thing would be abnormally cold. When someone says a dead body is "cold," they really mean "colder than I know a human body should be." Without some extra bit of magic, dead (or undead) things should be room temperature at best. Sometimes they even heat up to higher than room temperature because of the energy released in the breakdown of the body during decomposition.

Please note that vampires aren't the only undead with Cold Blood, they're just the most commonly used examples. Any undead creature with an abnormally cold temperature counts as well.

Contrast My Blood Runs Hot. See its Sub-Trope, Ghostly Chill, for when a ghost drops the temperature around them. See also Undeathly Pallor. Often a form of Glamour Failure.