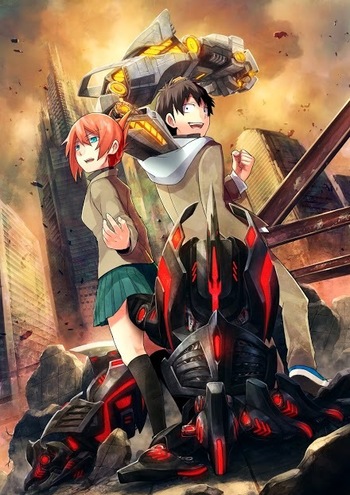 Roaring of the arm is your determination
Advertisement:

MECHA-UDE is a Kickstarter-funded anime being made by Sae Okamoto, the same woman behind the animated short "11:08"

One day, a boy named Hikaru Amatsuga comes across a strange mechanical arm. To his surprise, said arm turns out to be sentient. And intelligent. And powerful. As it turns out, this arm, named Arma, is actually a "Mecha-Ude" and not just any Mecha-Ude, but one that has been dormant for a 100-year. The two of them team up alongside Aki Murasame, a girl with her own Mecha-ude, Sinis and Dex and who is a member of the organization "ARMS", in a battle against the mysterious conglomerate "Kagami Group", who is bent on taking away every Mecha-Ude for their own gain.

The project was successful, making $67,918 and will come along with Japanese Audio Commentary and an additional short episode starring the "Heroine" thanks to stretch goals. Originally planned to be released on December 2017, it experienced several delays before finally being released on 30 September 2018 on vimeo for backers-only, with the physical release following later. You can watch the long version of the promotional trailer here.

Cyberconnect 2 is doing extensive animation assistance for the series.

You can officially watch the pilot episode over here