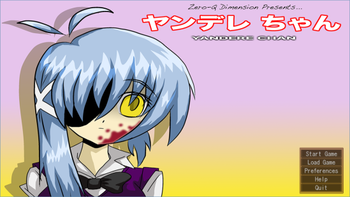 Yandere-chan is a Visual Novel created with the free-to-use Ren'Py engine. As the name implies, the main heroine is a Yandere of truly epic proportions. The game begins when you transfer into a new school and meet a girl named Mia, who seems to know you. It only goes downhill from there. There is only one good ending in the entire game, all other endings end... messily.

Compare Yandere Simulator, whose protagonist has this as her official nickname.