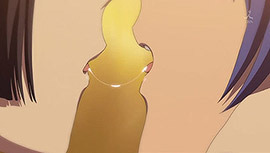 Sometimes a kiss between two characters isn't sexy enough. So what do you do to spice it up? Just make it a lot messier and make it clearer that fluids are being swapped with a spit trail. When the two subjects separate from their kiss, you see a strand of saliva between the two in order to make the kiss at least a little bit more explicit.

Looks similar to Phlegmings, yet characters who show one of these will rarely show the other.