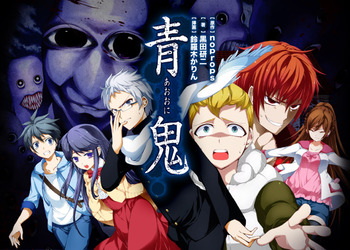 Ao Oni (Blue Demon) is a Japanese indie horror game for PC, created using RPG Maker XP in 2007. It follows the adventure of four teenagers who go into a supposedly haunted abandoned mansion in order to investigate it...

Keep in mind that different revisions of the game may have significant differences in the plot.

The game can be downloaded for free here.

In December 2016, Ao Oni 2 was released for Android, and Ao Oni 3 followed a year later; the original has been ported to this platform as well. There is also an Ao Oni Online.

the trailer for which you can see here

. A second movie unrelated to the first, Ao Oni 2.0, was released in 2015. There's also a Black Comedy anime shorts adaptation by Studio DEEN, Aooni the Blue Monster, which aired during the summer 2016 anime season.

A full-length anime, Ao Oni the Animation, came out in the fall 2016 anime season, featuring a new plot and characters, with a movie following in 2017.

Not to be confused with a 2001 Bungie game Oni, nor the trope Red Oni, Blue Oni.