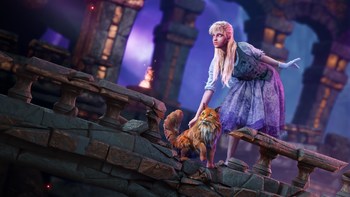 Catherine "Kit" Nightengale wakes up in the London railway, finding her vision fading, her father vanished, and herself injured. Fortunately for her, her hearing appears to help her make sense of her environment, and a very friendly and intelligent cat has decided to help guide her around. She picks herself up, dusts herself off, and decides to set out to find her father.

Of course, things are not nearly so simple, and she happens to stumble across a strange structure that resembles a blend between the London bridge and some sort of technological device...

Another Sight is a 2018 Puzzle Platformer, developed by Lunar Great Wall studios, set at the end of the Victorian era. Gameplay consists of switching between Kit and her feline companion Hodge to activate various bits of machinery in order to progress. Kit is reliant on ambient sounds to navigate, though she can call out to Hodge for a guiding meow; Hodge is highly mobile, but unable to throw switches, which the very human Kit can handle. Switching between the two provides two very different visions of the world around them... and as the game goes on, which version of reality is stranger becomes increasingly unclear...

Another Sight has the following tropes: