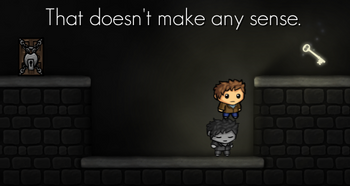 Another Perspective is a 2014 Puzzle Platformer, developed by Shaun Spalding. It has a young boy as a protagonist, who appears alone in the world and doesn’t know much about his world, and he’s searching for the truth to it. He has four clones, and the player is allowed to switch between them in order to solve puzzles. The inactive clones freeze in time and can be used as steps or bridges, while each clone also sees things from a different perspective, and may find doors, keys or platforms that others don't perceive.