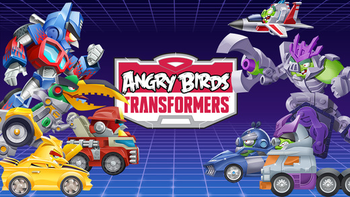 If you'd have bought Super Mario Bros. Transformers as a kid, you're not allowed to complain.
Advertisement:

Angry Birds Transformers is a 2014 mobile game and yet another spinoff of Angry Birds, putting a new spin on the game's concept in the same vein as Angry Birds Go! and Angry Birds Epic. It's essentially a Rail Shooter starring the Angry Birds and Bad Piggies cosplaying as Transformers. The Excuse Plot is that the Allspark (which transformed into the Eggspark along the way) has fallen to Earth, turning the birds and pigs into the Autobirds and Deceptihogs but also turning the Eggs into Eggbots which then turn anything they shoot into mechanical lifeforms. Thus, the Autobirds and Deceptihogs have teamed up to stop the Eggbots from taking over Piggy Island.

Each level has a specific Transformer attached to it who moves through the level, taking out Pigbots (Minion Pigs converted into mooks by the Eggbots) and structures while being shot at. Each Transformer has a different weapon and alt-mode (used to dodge falling towers and some weapons) and they can be joined by Energonicons, small satellites with abilities powered by collecting energon cubes. Players can also summon an ally, who will tag along for a few seconds shooting everything in sight.

On the world map, stages can be played if they've been affected by the Eggbots, or they'll gradually generate coins if unaffected. The Eggbots can attack any stage controlled by the player. Once the player reaches certain levels, they can explore new areas, revealing new Transformers to unlock.

As IDW Publishing currently holds the comic rights to both franchises in America, they produced a 4-issue limited series based on the game straddling 2014-15, written by John Barber and drawn by Marcelo Ferreira.