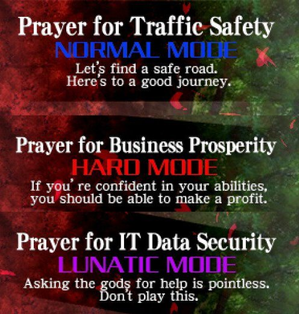 Seems like the gods need to git gud.
"This is a challenge for a true perfectionist. You know every rule, every detail, and all environments by heart. Even then you will die trying."
— Hitman: Absolution's Purist Mode
Advertisement:

Harder Than Hard mode is a Difficulty Level that's exactly what it sounds like: a mode intended only for the most skilled players who are looking for the toughest challenge the game has to offer.

To qualify for this trope, the difficulty level needs to be above any lower existing "hard" difficulty, and of course, be extremely difficult. If the game describes how each difficulty mode works, its explanation will often be an inversion of Surprise Difficulty, in that the game makes clear just how hard things are going to get. Oftentimes this is unlocked by beating the game on the lower "hard" difficulty.

How "fair" this difficulty mode is depends on the game. Games that are more skill based and want to encourage player improvement will stress that this difficulty is gruelling, but not impossible, and that you will need to bring your best skills forward if you want to succeed. Other times, this mode isn't even supposed to be fair, and the developers may warn the player, depending on whether or not they feel like being cruel. They may even go so far as to explicitly indicate that the game was not adequately play-tested, or might be unwinnable at that setting, or some blood-curdling warning along the lines of "don't play this".

This difficulty setting tends to be infamous for making players cry and tear out their eyelashes from frustration of losing. Some games get so notorious for these modes that people will forget that normal (and easy) modes exist and only base their opinion on the hardest difficulty modes, even if the normal difficulty is actually pretty sane.

In order to further emphasize these difficulty levels being largely optional, some games only reward the player with Cosmetic Awards and/or other bragging rights instead of something more substantial upon clearing them. However, on rare occasions, especially in instances where the developers are actually encouraging players to improve their skils at the game instead of just punishing them, the reward for clearing this mode can indeed be something truly special.

Subtrope of Nintendo Hard and Challenge Run. Often overlaps with Final Death Mode, and sometimes with Unwinnable Joke Game. Compare Rank Inflation, Brutal Bonus Level, and Superboss. Contrast Easier Than Easy and Mercy Mode; can be Non-Indicative Difficulty in the rare case that this mode makes the game easier, which is most likely a bug or oversight.

Expect speedrunners to be able to beat these modes with total ease.