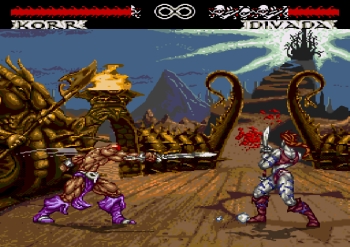 "Since the dawn of time... man has battled!! The DemonLord reigns supreme... At the height of the demon's power, six warriors dare to face him. It was foretold one will live to meet the demon in combat and the Lord of Demons will fall by the hand of the... WeaponLord."
— Opening Narration
Advertisement:

Weaponlord (sometimes WeaponLord) is a 1- or 2-player Fighting Game originally designed for release on the Super Nintendo by Visual Concepts, and published by Namco. During the inception of the title, the development team also began work on a Sega Mega Drive/Genesis version and both were released in October 1995. Weaponlord introduced many groundbreaking gameplay aspects that appear regularly today. In fact, James "DJames" Goddard, one of the driving forces behind the game's creation and a former game designer for Street Fighter II, believes that his weapons-based fighter helped inspire

Namco's Soul series. Also, unlike other titles, Weaponlord was not intended to replicate an arcade fighter, but built from the ground up on home consoles. This was a reverse of the normal trend, which had arcade versions being developed first, then getting ported to home consoles.

On a battlefield a demon spirit enters the body of a dying mercenary. He is reborn and defeats twenty rulers in bloody combat. He goes on to found the reign of the DemonLord Raith. At the height of his power, his doom is foretold by a blind shaman: "When the night turns violent and the moon bleeds, gripped by the skeletal fingers of death...a child will rise to face the demon in combat...and the lord of demons will fall by the hand of...the WeaponLord."

Against the advice of his lieutenants to kill the children born that night, the DemonLord waits to face his foretold killer in fair, one on one combat. Years later the demon Zarak overthrows Raith and becomes the new DemonLord. 25 years after the prophecy was made, Zarak holds a great tournament of champion warriors. The winner will face the demon in a final battle. The DemonLord prepares to meet his destiny head on and to destroy the WeaponLord.

If one wishes to see a few minor details of the game and the process of how it even got to where it is, game developer James Goddard has his own website

with a description about the game, a few videos showing features the game had, a few drawings and even a link to the full promotional video.