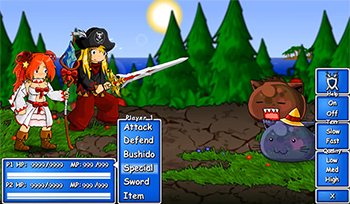 The wave where it all began.
Advertisement:

The plot for the original Epic Battle Fantasy game is literally non-existent: you play as Matt, a Magic Knight-type character in pirate gear who uses "Bushido" (and a rather impressive collection of specialized swords and other weapons) along with his teammate, a Fanservice-y Red Mage named Natalie (or Natz for short). You fight wave after wave of enemies with the occasional stop at a shop to buy items.