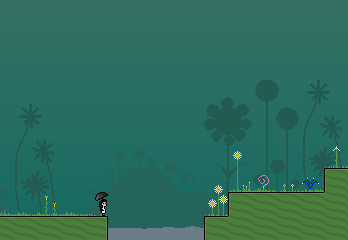 "Among Knytts and other creatures, many stories about Juni are being told. Although the stories often make very little sense — many of them often contradicting each other — a small number of them are known to be partially true.
This is one of those stories."
Advertisement:

A freeware platformer game by Nicklas "Nifflas" Nygren, creator of similar freeware platformers such as Within a Deep Forest and the original Knytt. Though it only comes with one full level and a tutorial, the game has an integrated Level Editor and new levels are very easy to install. Several additional official levels by Nifflas have been released (see below), and the game has a very active fan-made level community. Tons of levels can be found on Nifflas' forums

Knytt Stories has been billed as an "environmental platformer". Though enemies and obstacles exist which can kill your character, a tiny humanoid named Juni (whose backstory tends to change even between the official levels), the ambient/playground levels tend to be the most popular, thanks to the gorgeous music and sprite packs — both the originals and those added by the level community.

Official levels (made by Nifflas) include:

Official levels by Nifflas and the game in general have examples of:

In addition to the game itself, fan-created levels have examples of: