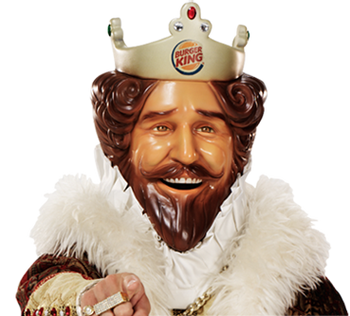 , the fast food establishment, isn't all that trope-worthy on their own. They're the second-largest burger chain in the United States, they have a global presence, and they're subject to several stock parodies, along with their major competitors.

That said, they've also created an advertising icon — "The" Burger King. And he's a whole other story entirely....

The Burger King started off humbly enough. He was Burger King's answer to Ronald McDonald in the Seventies, and he appeared in both live-action

forms. He came off as a bit of a Cloud Cuckoolander, but was otherwise benign. However, he was quite forgettable and faded into obscurity during the Eighties.

Fast forward a few decades to 2004, and Burger King decided to bring their mascot out of mothballs. This time, though, he became... much more disturbing and adult. Now a guy in an obviously plastic mask right out of kigurumi and royal finery, he started appearing in ads aimed at adults. By appearing where you probably weren't expecting him. Like at a construction site

. Or, most famously, in your bedroom

. Simultaneously disturbing and amusing, the ads took off.

How much so? The Burger King managed to work his way into three different video games (granted, made specifically as an in-store promotion, but still). He's also managed to become a pop culture icon, of sorts—you can buy the mask. He's had the occasional Youtube Poop appearance, too. There's also his... interesting...

As of 2011, Burger King decided to retire the mascot

in favor of something a little more mass-market-friendly. However, he quietly returned in 2015; his weirdness in the new ads has been toned down but isn't completely gone.

The Burger King gives examples of: