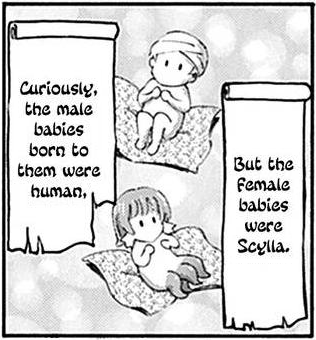 Two-species couples open up a lot of questions about what their children will look like. This is avoided in many cases by having all boys look like their fathers and all girls look like their mothers. note No one ever considers the intersex and nonbinary children (granted their relative rarity may be a significant contributing factor)... This can also apply to different types within the same species (e.g., in Lady and the Tramp, the eponymous dogs are of different breeds. Female offspring look like their mother, the one male like his father).

In American media, female dogs are often represented by poodles and, occasionally, other elegant-looking breeds like Malteses, salukis, or bichons; other breeds, and mutts, are usually male. Also, almost all cats are female.

It should be noted in male/female same-species examples given here that it is possible for traits to be sex-linked. Since human females have two X chromosomes and males have one X and one Y (usually; there are cases where it is not so clear), diseases or other things can be restricted to one sex. See more on that here.

Sub-Trope to Either/Or Offspring, which is about offspring of two-species couples only inheriting one species in general; and Lineage Comes from the Father, though in this trope, the daughter takes after the mother instead. Sister Trope to Dominant Species Genes, where one species dominates regardless of gender. Compare with Bizarre Sexual Dimorphism, where a single species has very different-looking genders, and Patchwork Kids, where the children look (and often act) like a perfect mix of the parents. (Of course, with Tertiary Sexual Characteristics, it's quite reasonable that these would be—and are—passed on from same-sex parent to child...)

You can expect this trope even more when at least one of the parents is a member of a One-Gender Race, although it does make a pretty good excuse.