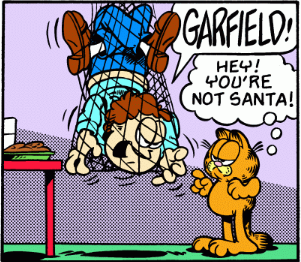 Too bad Santa's not the only one who likes milk and cookies.
"You idiots! These are not them! You've captured their stunt doubles!"
— Captain of the Guard, Spaceballs
Advertisement:

So you have the Booby Trap all set up. You got the bait linked to a bomb, a cage, or even catapults aiming cream pies at the intended target. Everything is going smoothly and no one expects a thing, until...

Wait, what is that idiot doing there? Hold on- BOOM!

As a general rule, Booby Traps are indirect weapons that are not very discriminating about who or what they go off on, making them very susceptible to Finagle's Law, as illustrated above. As a result, any would-be Trap Master runs the risk of the trap going off on someone or something other than the intended target, often someone they don't want getting crippled, killed, humiliated in front of everyone, or outright pissed. And if this unfortunate trap-ee happens to be some big dude or creature who happened to get in the way, they may want to start running.

Subtrope of Spanner in the Works. Sister trope to Self-Offense, Mugging the Monster and Pity the Kidnapper. See also Hoist by His Own Petard for one who gets caught by their own trap. May lead to Unintentionally Notorious Crime or Murder by Mistake if the trap is deadly.

Those examples were made for someone else!