Advertising / Jack in the Box 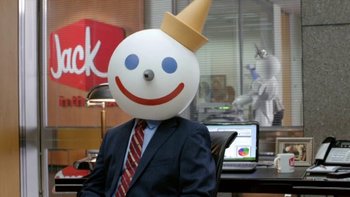 Fast food chain Jack in the Box has aired a series of commercials since 1994, most of them featuring their company mascot Jack — a man in a business suit whose head is simply a snowman's head.
Advertisement:

A 2010 commercial where he argued with a chef about selling pancakes that resemble his face became a Memetic Mutation, especially for the last line "You ATE his face?!"

You ATE his Tropes?