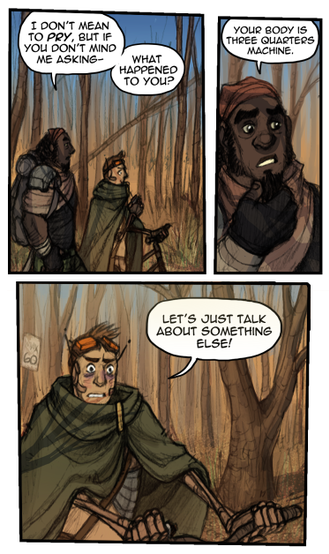 "Screw this quandary with a fucking jackhammer. Let us just talk about whatever we were discussing before this shitstorm started flailing about the room."
— The God-Emperor of Mankind, If the Emperor Had a Text-to-Speech Device
Advertisement:

Some characters feel a current line of discussion is really inappropriate, and they make it clear they should move on to something else. Sometimes they say "moving on" or "I'd rather not talk about it", or just leap into another topic.

Reasons the current subject isn't working can vary. It may be too Squicky for the character's comfort, might be close to personal events they've experienced, or even something like a Metaphorgotten line.

There's a hand gesture that shows up frequently in anime and manga that means basically this.

Compare Stunned Silence and Shutting Up Now. Contrast Digging Yourself Deeper (trying to talk your way out of an uncomfortable subject, and utterly failing).

The "new topic" turns out to be Dementor asking how Drakken's skin turned blue, which Drakken starts to explain just as the show ends.

Edmee decides now's not the time to talk about Arlo's missing mom.

Edmee decides now's not the time to talk about Arlo's missing mom.