Film / The World Is Not Enough 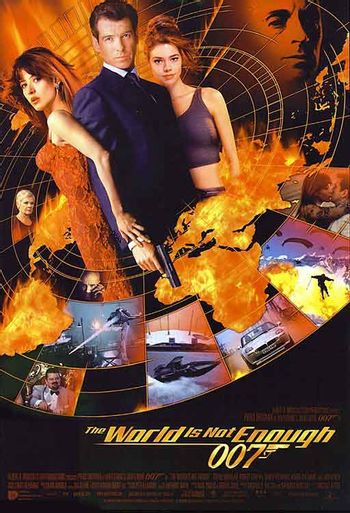 No one ever died from wanting too much...
"There's no point in living if you can't feel alive."
— Elektra King
Advertisement:

The one where Denise Richards plays a nuclear physicist.

The World Is Not Enough is the nineteenth Eon Productions James Bond film, the last of the 20th century and the third starring Pierce Brosnan. It was directed by Michael Apted and was released on November 26, 1999. Garbage performed the Title Theme Tune.

Bond is assigned to watch over a once-kidnapped daughter of a Ruritanian oil baron after he dies securing money for her release. "Renard the Anarchist" is quickly deduced to be the likely culprit. MI6 tried to assassinate him before, but you can't keep a good terrorist down: it only resulted in lodging a bullet in Renard's brain, which is slowly killing him as it moves inwards but is also destroying all of his senses. Renard can't smell or taste anything and, crucially, he can't feel pain.

Meanwhile, four rival oil pipelines are being built across Eurasia. The mogul's daughter, Elektra King, owns the British pipeline and is everyone's favourite heiress, meaning that Bond needs to protect her, even though something just doesn't add up with her plans.

Preceded by Tomorrow Never Dies and followed by Die Another Day.