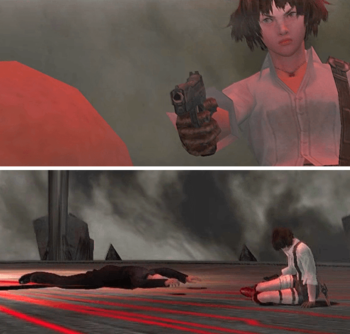 "Here I thought I wasn't gonna cry."
A non-fighter — call her Alice — gets the drop on a bad guy who is threatening her or another sympathetic character. The bad guy is usually undeterred since they doubt that Alice could actually do it and will often try to talk her down or simply step in and take the gun away. But she holds fast, pulls the trigger, and shoots.
Advertisement:

Immediately afterwards, we see the emotional weight of what's just happened land on Alice like a ton of bricks. Perhaps a horrified or sickened expression settles on her face. She may go into a full Heroic BSoD, dropping the gun and bursting into tears. Sometimes she collapses. Alternatively, she doesn't react much but she freezes in shock, neither moving nor lowering her weapon until someone more battle-hardened comes over and takes it out of her trembling hand. Sometimes that other is the bad guy themselves, who was merely wounded and is ready for Round 2.

The usual meaning of this trope is to signify that Alice has never shot anyone before (perhaps has never even held a gun before) and is emotionally unprepared for the aftermath. While either gender can react this way, it is more likely to show on female characters, who may act shaky and hysterical even before the act. Where a man could look down the barrel and coldly say "I'll Kill You!", a woman will point the gun with a hand quivering in rage/fear and scream "I'LL KILL YOU!" with tears running down her face.

There is a real phenomenon, occasionally called "Killer's Remorse", that can accompany the first kill of someone not trained against it, punctuated by tears, shakes, and occasional vomiting. This is generally considered a healthy reaction, as taking a life is supposed to be a difficult and turbulent stigma to overcome, i.e. unpleasant in every sense of the word. Soldiers actively train to prevent this from happening, while sociopaths and psychopaths do not experience it at all. Most police services require mandatory counselling for officers who have to take a life. And it's also an issue that impacts civilians forced to kill to defend themselves. Of course, once that initial unpleasant experience has passed, It Gets Easier might apply. Which, depending on the circumstances, can be worrisome. (However, It Never Gets Any Easier may also apply, if the person is not in a line of duty that involves multiple kills.) Killer's remorse is also known to impact hunters who kill game for the first time, with It Gets Easier usually expected to follow, though some people hang up their rifles and swear never to do it again.)

Compare These Hands Have Killed, when a killer looks at their hands while contemplating the gravity of what they have done. Also see My God, What Have I Done? and Cradling Your Kill.