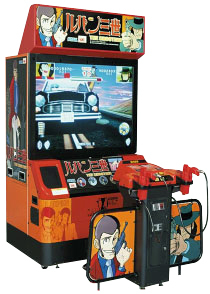 A Light Gun Game video arcade made in 2001 from Sega and Namco under the WOW Entertainment label. As the title suggests, this is a video game based off the Lupin III franchise. It presents a few mini-games based off the Lupin III: Part II TV series (and a few movies) in which you play as either Lupin or Jigen and fulfill the objectives presented to you. Some of the objectives are based off simply shooting the bad guys, while others have you shoot a certain target, use a special device to nab treasure, or steer a car to avoid traffic. Failure to meet the objectives results in a life lost and losing all of them is instant game over.

The game has the following tropes: