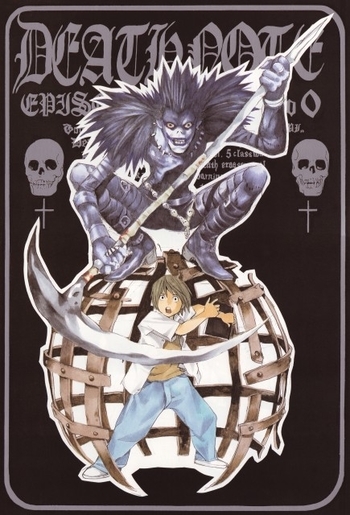 Before the hit manga Death Note was first published in 2004, a year before, there was a one-shot pilot which ran in Weekly Shonen Jump #36.

It all starts when a Shinigami named Ryuk accidentally drops his Death Note into the human world. A thirteen year-old Japanese boy named Taro Kagami (names have been changed to protect the innocent) finds it on the ground while walking home from school. Since the Death Note title is in English, and Taro only knows the English word "note" and not "death", he takes it home to use as a diary.

It all goes downhill from there.

The rest of the one-shot plays out like a supernatural horror story, which ends with the death eraser which Taro uses in the end to bring all of the victims back to life; years later, rumors of the incident become a popular urban legend and pop-culture phenomenon.

Readers liked it so much that it was adapted into the full series that it is today. However, there were plenty of changes. As quoted from the main page: "the schoolboy became a mega genius with a god complex, the boring Film Noirish detective became a freakish mega genius with a sweet tooth, and the Deus ex Machina ending was replaced with plans by the bucketload, and the rest is history".

It was republished in Death Note 13: How to Read.

Examples of tropes from this one-shot include: