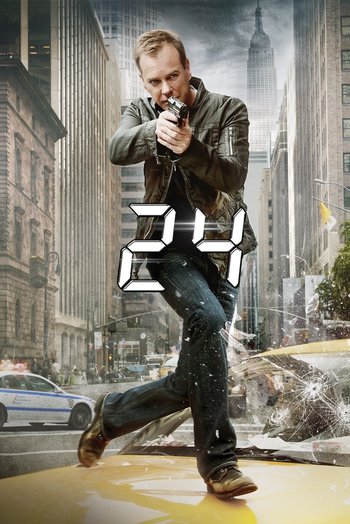 "Right now, terrorists are plotting to assassinate a presidential candidate. My wife and daughter have been targeted. And people I work with may be involved in both. I'm federal agent Jack Bauer — and today is the longest day of my life."

The following takes place between 2001 and 2017. Events occur in real time.

Spoilers ahoy! Read at your own risk. You Have Been Warned.

Hit US TV Series starring Kiefer Sutherland as Jack Bauer, agent for a fictional US government agency, during some very bad days. Each season of the series takes place in Real Time over the course of a 24-hour period (each episode is one hour out of that day), during which Jack is called into service to Race Against the Clock and stop a terrorist threat.

The first season revolved around an assassination plot on presidential candidate David Palmer. Jack's wife and daughter are kidnapped to make him assassinate Palmer on the terrorists' behalf; the only link the two of them have was a covert wetworks operation in Sarajevo, which turns out to be the motivation for the day's plots.

Each season since then has revolved around a large-scale terrorist threat to a major city, usually backed up by a Crazy-Prepared Big Bad, a well-thought-out Evil Plan, and, sometimes, a Diabolical Mastermind, typically revealed during a Wham Episode. So far, the threats have been nuclear bombs, a bio-weapon, a nerve agent, and more nuclear bombs, with some presidential assassinations along the way. All in a day's work, eh?

The series is shot in strict real time, and with commercial breaks included covers a full 24 hours. (Without them it's about 18.) It uses of a lot of Split Screen, never employs Slow Motion, and displays ticking digital clocks as book-ends to commercial breaks and at various times during each act; these factors contribute to the sense that events are moving at a breakneck pace. It follows not only the adventures of Jack and other field agents, but also political intrigue centering around the people who give Jack orders back at CTU, and sometimes the people who give them orders, such as the President of the United States; the sitting President has been a starring character in every season but the first, and even then Jack reported to the candidate who would be voted into office between Seasons 1 and 2. Finally, it isn't scared of Player Punches; Anyone Can Die, to an extent that was only equalled when Game of Thrones took to the airwaves.

The Hollywood Writers' Strike of 2007/8 kept the series off the air during 2008, with the exception of a two-hour Made-for-TV Movie, Redemption, which aired in November 2008 and acted as a teaser for the seventh season. The seventh season was a Retool which moved the action to the East Coast and generally improved on the fairly mediocre Season 6. Season 8 allowed it to take the title of "Longest-Running spy Show" by episode count away from Mission: Impossible, which had held the title since 1973. It premiered on January 17, 2010 and moved the action again, this time to New York. It marked the end of the show's contiguous run.

The Movie, hinted at as early as Season 5, was scheduled to begin shooting in Spring 2012, but died at the hands of budgeting issues. Instead, it returned as a 12-episode mini-series called 24: Live Another Day (although the subtitle doesn't appear on screen), which took place in London and aired from May to July 2014. It involved the return of much of the central cast and crew.

In January 2016, the show was slated for another return. Fox ordered a pilot for a Sequel Series called 24: Legacy. It takes place in the same continuity as the original show and features one returning cast member. Sutherland returned on the other side of the camera, as executive producer, but the showrunners the character of Jack Bauer did not appear. Legacy premiered following the Super Bowl on February 5, 2017, and finished its first season on April 17. But in June of the same year, Fox announced that it was also to be Legacy's only season, as they cancelled the show, though the channel would at the same time state that they were still looking into creating another incarnation of the series.

Anil Kapoor has driven forward an effort to create a Hindi-language remake of the show, also entitled 24 but called "24 (India)" here on the wiki to differentiate. Kapoor plays the main character, Jai Singh Rathod. The show aired on the Indian network Colors.

A Japanese remake is currently airing in Japan with the first episode from October 9, 2020 via TV Asahi, starring Toshiaki Karasawa as Jack's equivalent Genma Shidou.

24 can be seen as a throwback to earlier works: a Dirty Harry for the War on Terror, or even a Republic Serial for the 21st century. It is also jokingly referred to as "the Jack Bauer Torture Hour", or "the Jack Bauer Power Hour". Try to guess why.

24 includes examples of the following tropes:

When Nina Myers arrives back at CTU on "24," Jack wants to know what she's doing there, as he wanted her to remain with his wife and daughter, Teri and Kim, to make them feel safe. She assures him that they are safe, that she settled them in and the extra security team is in place. Cue splitscreen of them in a car fleeing for their lives, followed by a cut to this scene.

When Nina Myers arrives back at CTU on "24," Jack wants to know what she's doing there, as he wanted her to remain with his wife and daughter, Teri and Kim, to make them feel safe. She assures him that they are safe, that she settled them in and the extra security team is in place. Cue splitscreen of them in a car fleeing for their lives, followed by a cut to this scene.