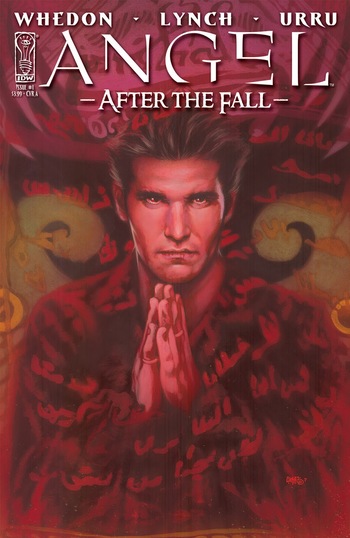 From 2007—2011, IDW Publishing published a series of tie-in comics based on Angel. The first arc, Angel: After the Fall, picks up in the aftermath of the last episode of the TV Series. After the Fall was penned by series creator Joss Whedon and is considered canon to the Buffyverse. Everything after that is either non-canon or Broad Strokes, as Season 8 comics show what happened with Angel right after L.A. is restored to normalcy by the Senior Partners.

This page is intended to cover all Angel and Spike comics between "After the Fall, Part One" and "Stranger Things". For the subsequent - and canonical - Dark Horse Comics series, see Angel & Faith. Also, keep in mind that spoilers from the televised Buffyverse are not tagged.

Not to be confused with Fallen Angel, another IDW-published comic book with "Angel" in its title. It is worth noting, however, that Illyria made a crossover appearance in Fallen Angel: Reborn.

Tropes included in the series:

Tropes included in Last Angel in Hell, an in-universe film about the events of After the Fall:

Alternative Title(s): Angel After The Fall