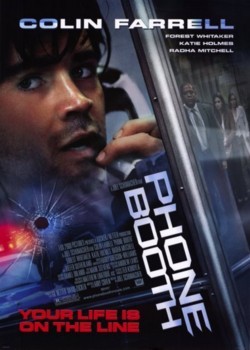 "Isn't it funny? You hear a phone ring and it could be anybody. But a ringing phone has to be answered, doesn't it?"
— The Caller

Phone Booth is a 2003 suspense film directed by Joel Schumacher about a publicist, Stu Shepard (Colin Farrell), who finds himself held hostage in a phone booth in full view of the New York City public by a sniper (voiced by Kiefer Sutherland) who has uncovered him plotting an affair with Pamela McFadden (Katie Holmes), and wants him to change his ways. To prove his seriousness, the voice on the other end snipes a bystander who's hassling Stu to get out of the booth.

As Stu plays a very dangerous hair-trigger game with the voice, the police show up and are perplexed by the panicked man who refuses to exit the phone booth. Thus begins a three way battle of wits as Police Captain Ed Ramey (Forest Whitaker) tries to decipher Stu's situation.

One of the selling points of the movie during previews was that it is set in Real Time, often using Split Screen techniques to show things going on at the same time. This came on the heels of 24's initial success on TV (coincidentally, both works feature Kiefer Sutherland in a major role).